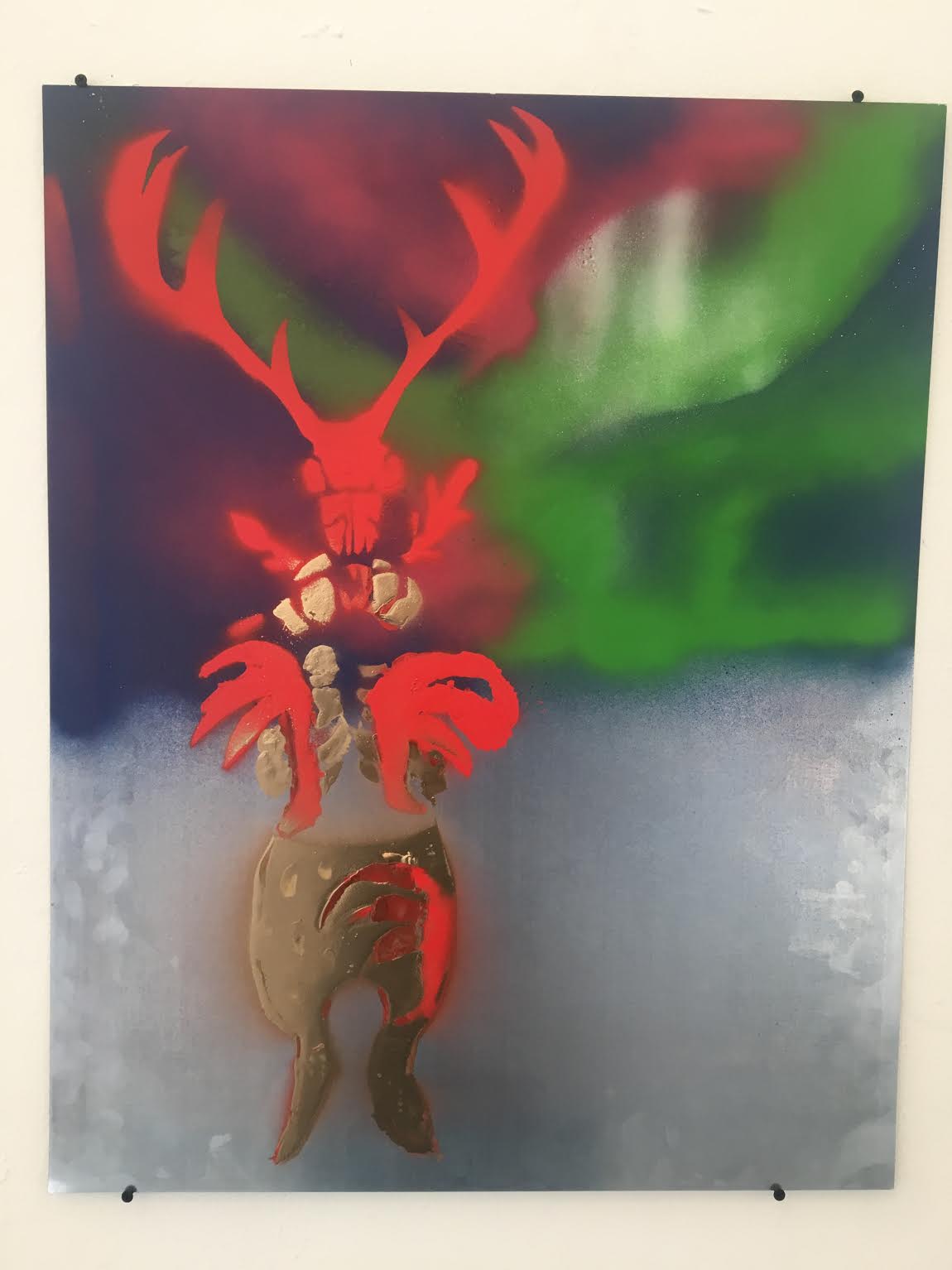 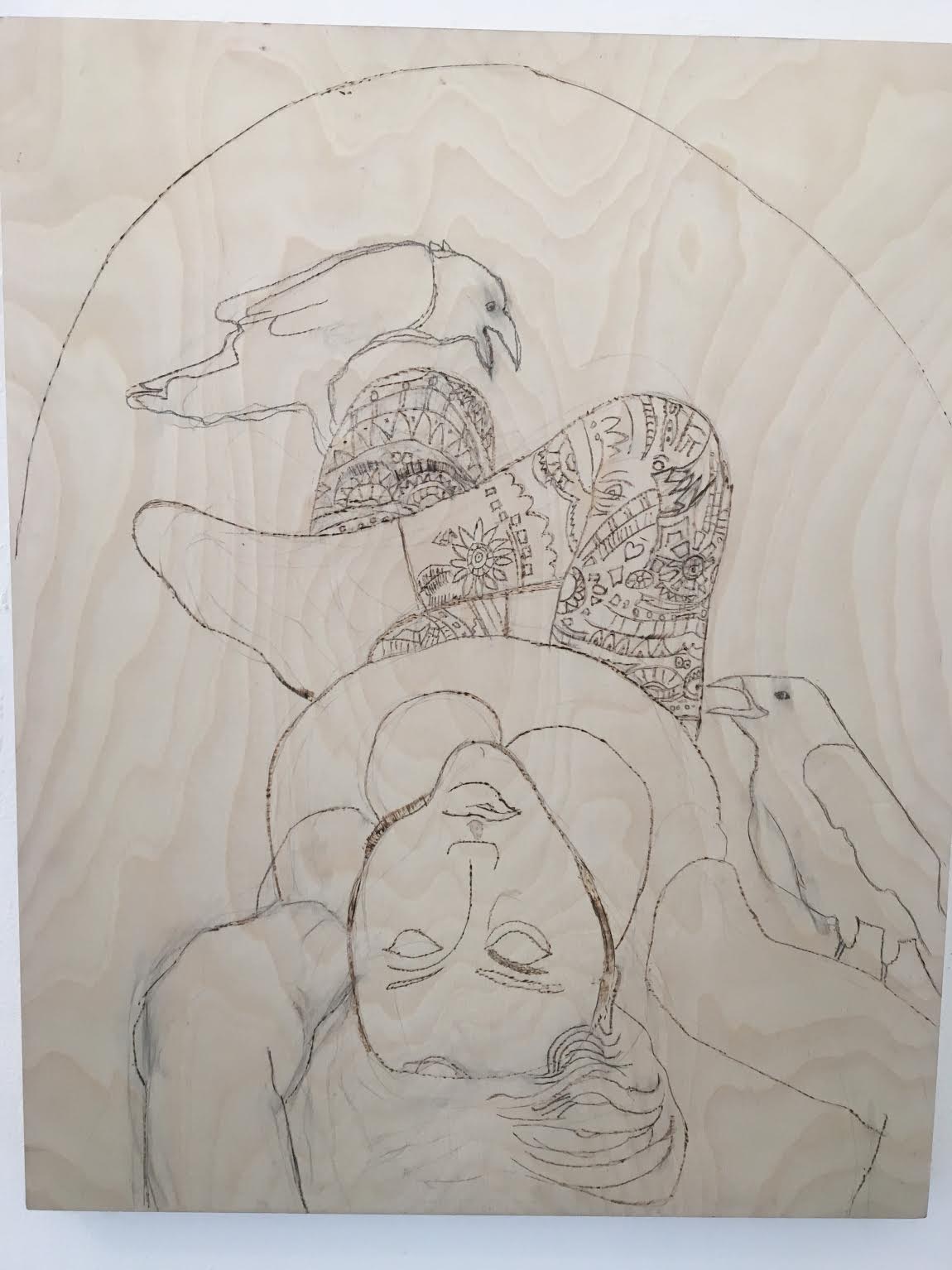 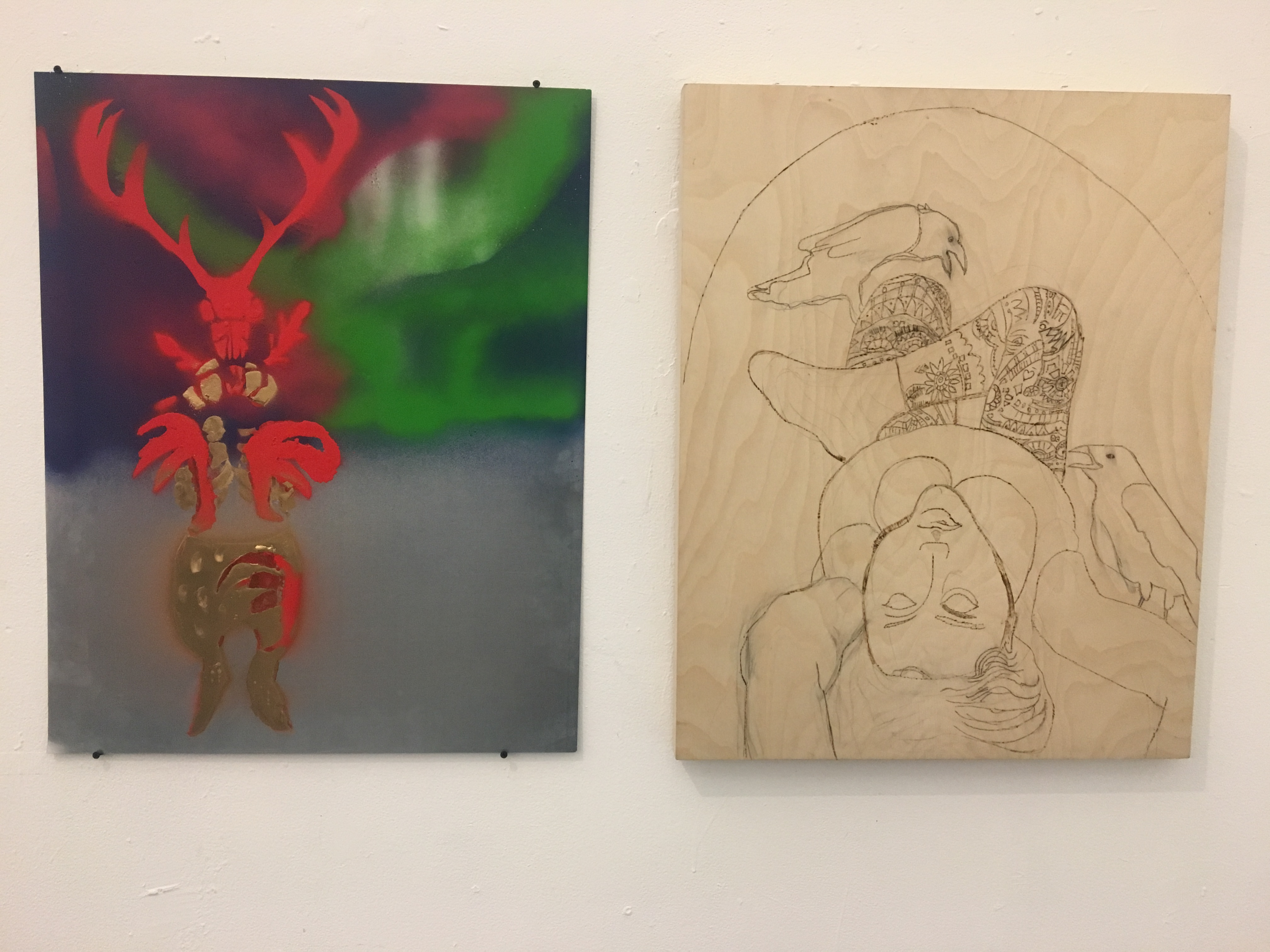 These two pieces go side by side. One is made of metal and spray paint. The other is burned into wood. The firt, left, image is of the arctic mythological creature the Wendigo. He has a deer skull head and a ribcage in front of the cold Northern Lights. The right drawing is of me in an igloo with ravens. Are they beneficial creatures or attacking a dead body? It's up to you to imagine. 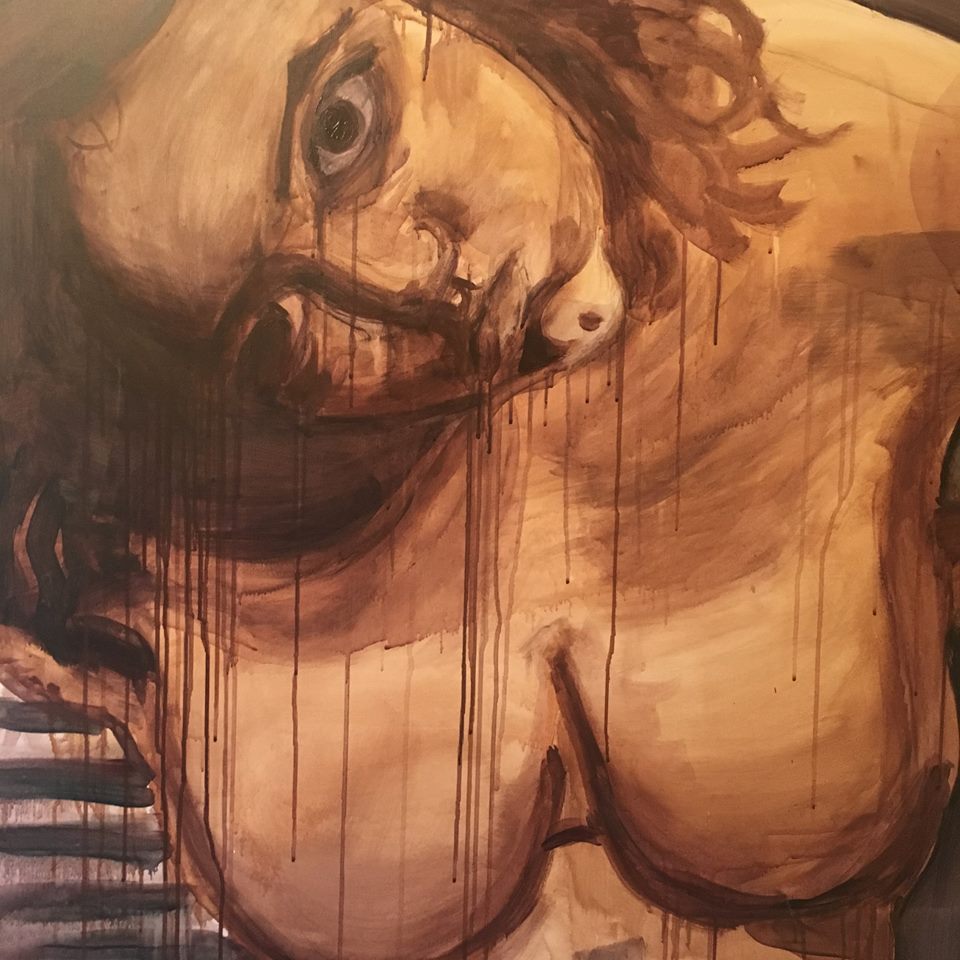 This was a breakthrough piece for me. The power of painting a topless portrait of myself really seized me. Originally I was going to do a picture of my ass. I stood in the bathroom made of corrogated tin and took a bunch of pictures of myself naked. I knew this one was my favorite but i was scared. Ater my teacher Felicita Norris said it was her favorite, I gave into the allure of doing a topless painting. I felt so liberated! For days I was on a high for showing my body with better than usual body image. I used to be terrified of my body and in order to get in the shower with someone I had to drink tequila from a little yellow and black skull. This is one of my favorite pieces that I've ever done. 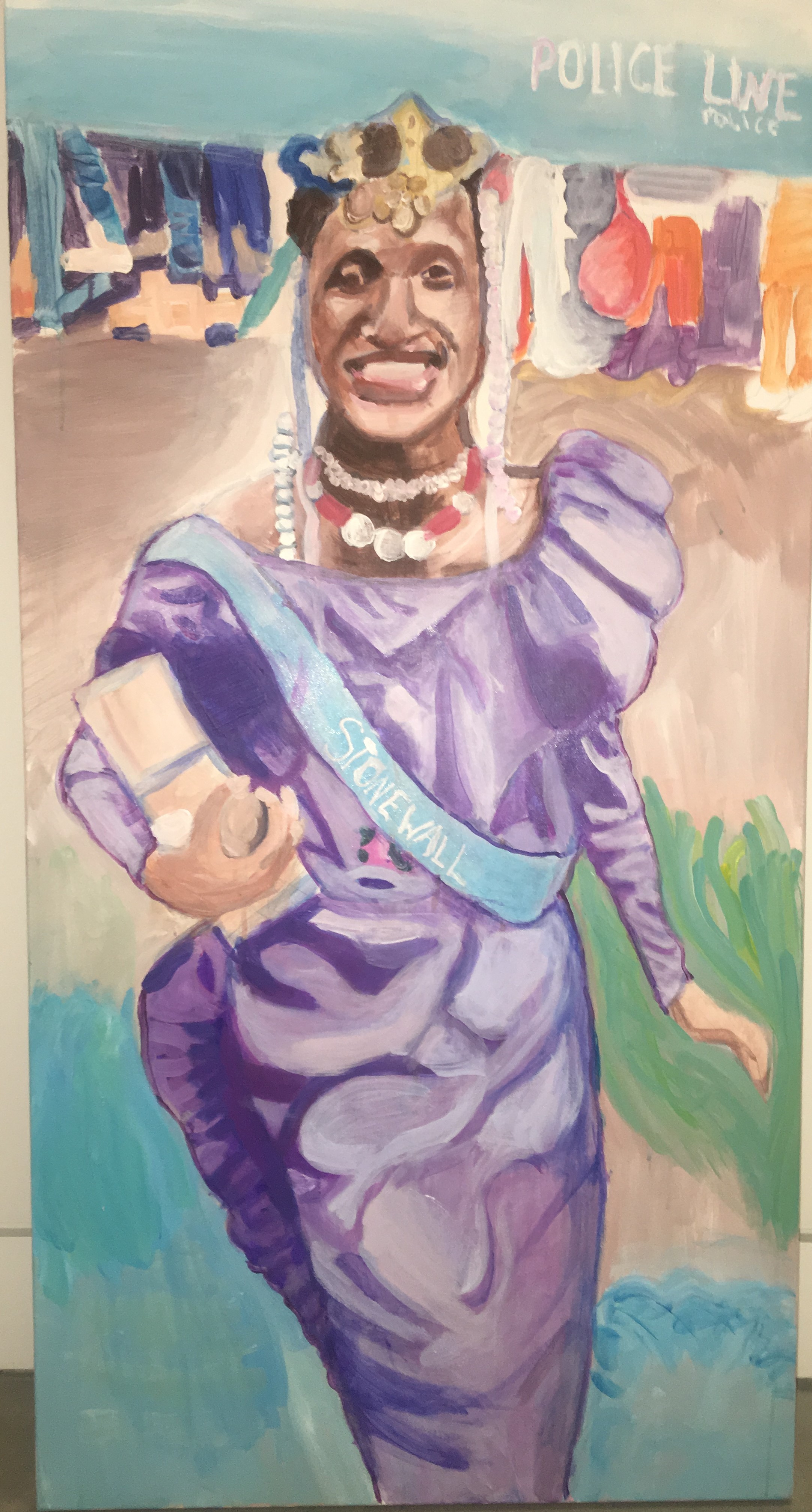 My Marsha P. Johnson piece stands tall: it creates in viewers a sense of optimism and power. Marsha P. Johnson was an African American drag queen activist from New York City. Her sash reads Stonewall, which she was a leader in, and behind her is a Police Line to contrast as the police were what provoked the Stonewall uprising. Johnson founded STAR: the Sweet Transvestite Action Revolutionaries.  She is pictured in pastel at Coney Island beach, seaweed that washed up growing on the right of the painting. Her expression is broad, proud, and joyful, as she was as a human being. The purple of her dress is royal, like her spirit and radical power. 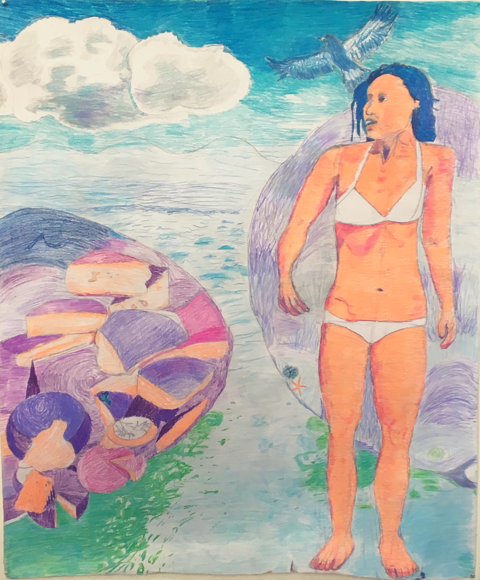 I had a dream about a young woman on an island who could talk with wolves and an island made of brie cheese. I admired this woman very much and she told me stories. 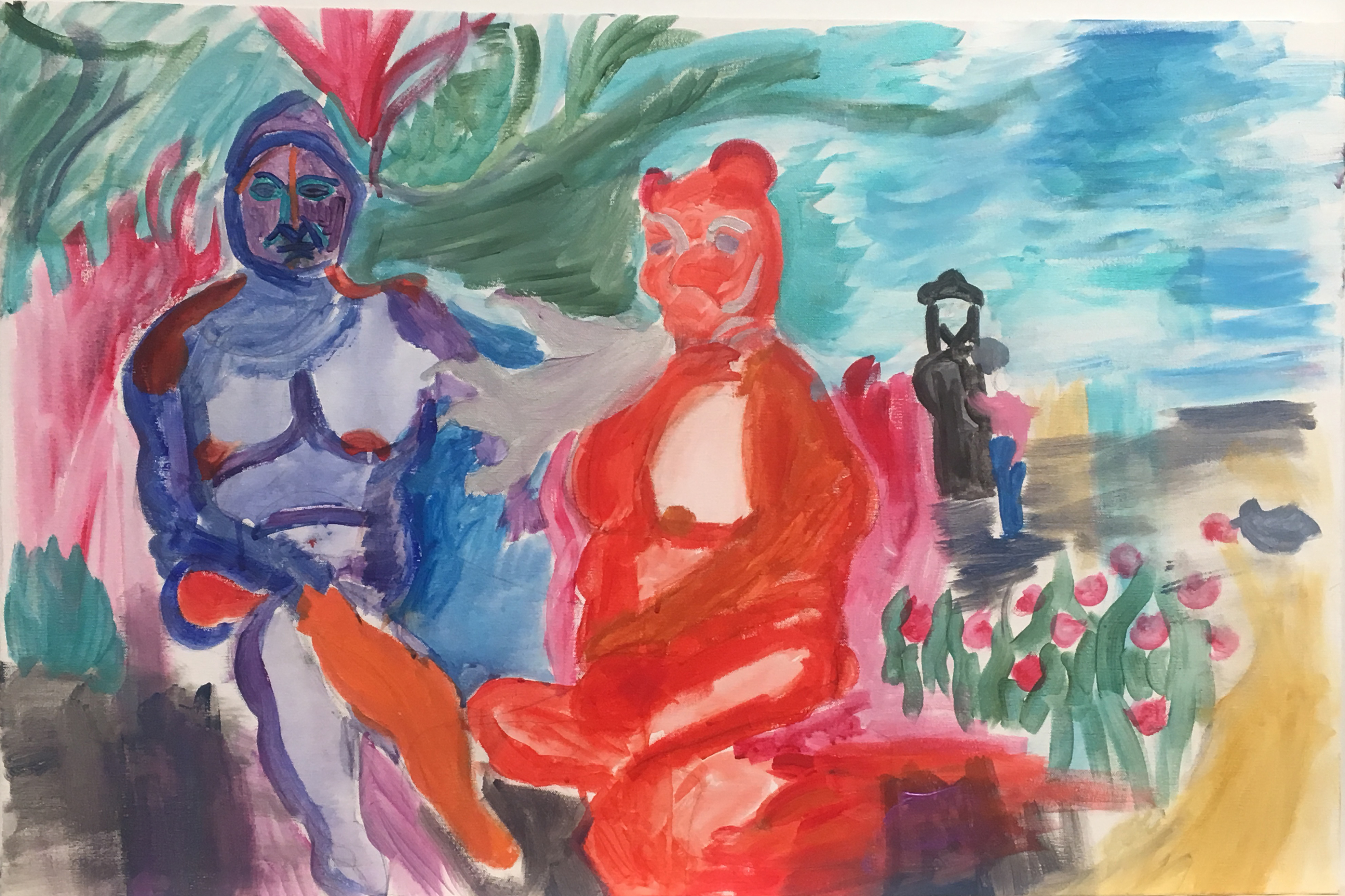 This painting is based on a day in the Brooklyn Botanical Gardens. In the back of the tulips is a Hasidic Jew and a child. (I'm also Jewish.) This picture brings to mind family friends who I've walked the gardens with. 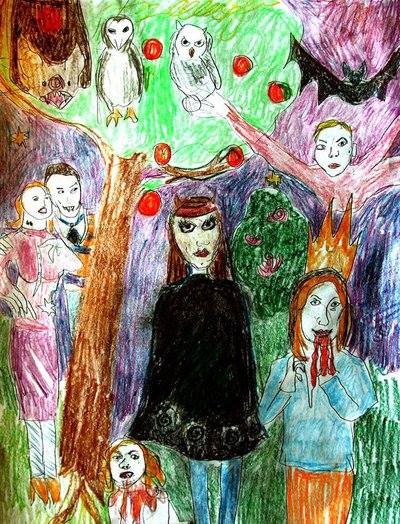 I never used to love vampires. I was more of a pirate girl. But when my friend bit me on the arm, to which I replied "Did you just bite me?" and she said "no" and I said "I don't believe you," I have loved every vampire, especially the Jewish and gay ones from "The Fearless Vampire Killers." 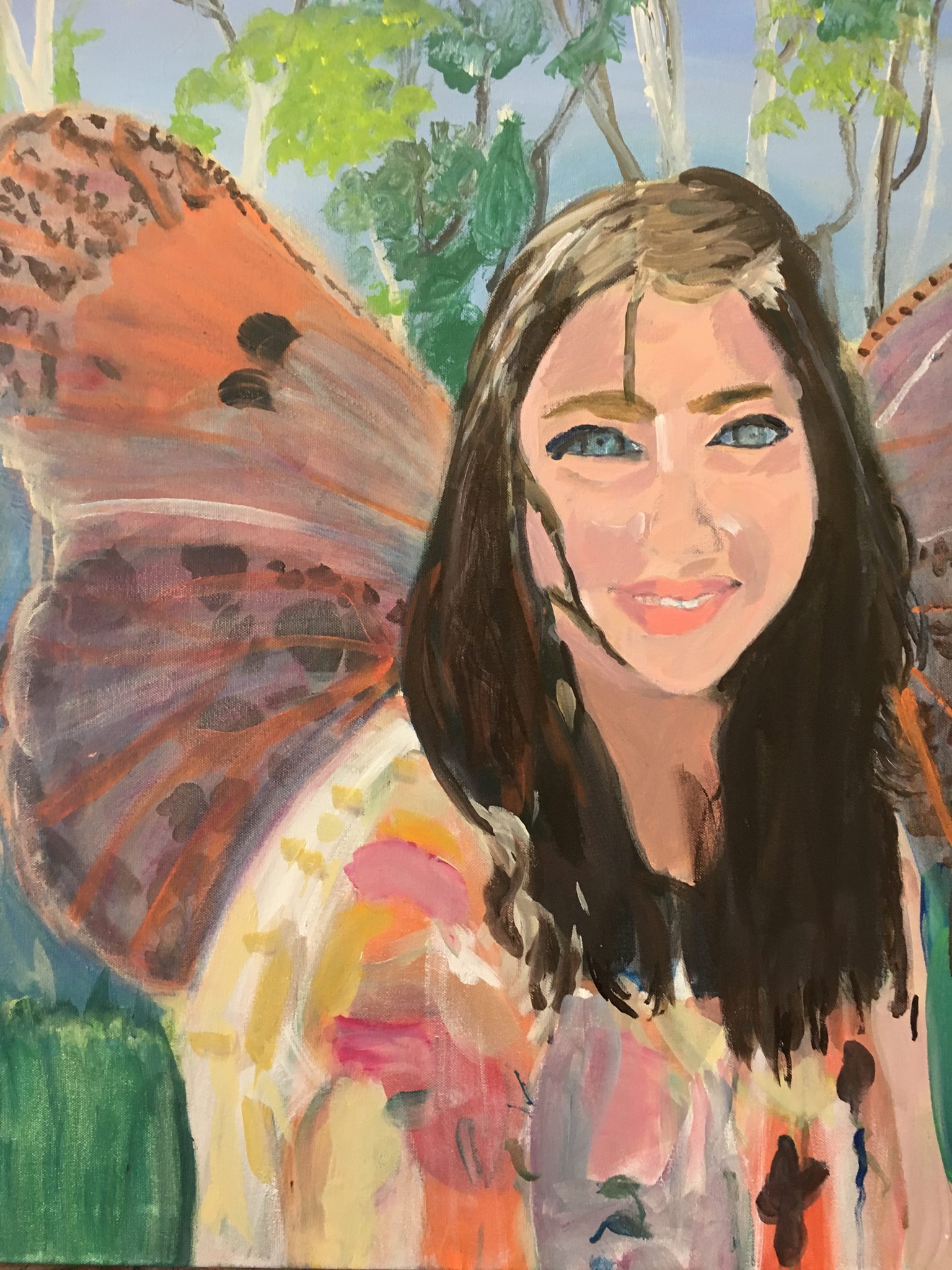 Miriam is my best friend. I could easily see her as a fairy. This painting was inspired by my giant book of butterflies. They are incredible. 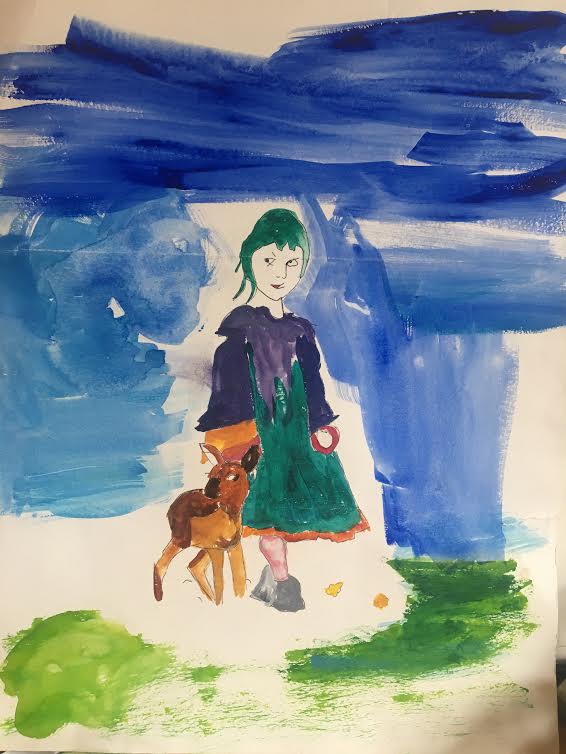 This piece is based on Alice in Alice in Wonderland. 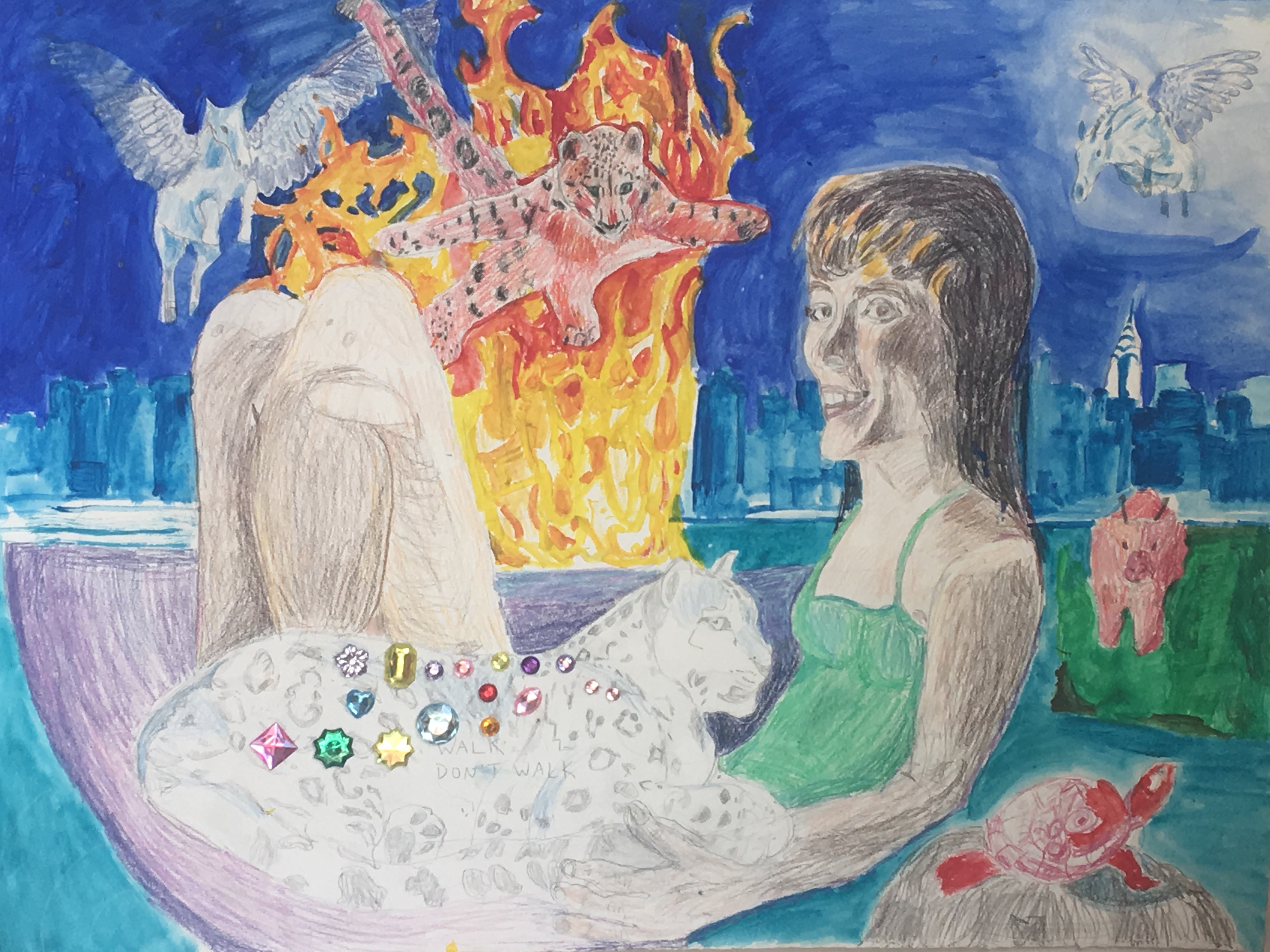 This piece is about my spirit guide Sophia, a fire, a city, and a manifestation of creatures from the upper and lower worlds, like the red flying baby snow leopard and the red reindeer named Little Lucifer. In the sky are pegasuses which symbolize poetry. This story is partially a bedtime story my best friend Miriam told me about a sequence of sequins stacked upon the snow leopard’s back, mixed with my own experiences going to the spirit realms.